If you have an interest in MLM, you will probably have heard of Valentus.  They have had a lot of publicity recently. Timeless Vie have written about them before. I will present here a timeline of events and hopefully add to it as developments happen. Let me know if you see anything happening in Valentus so I can update the timeline.

They were dissolved by way of a compulsory strike-off. Here is the official document telling Valentus their business has been dissolved. 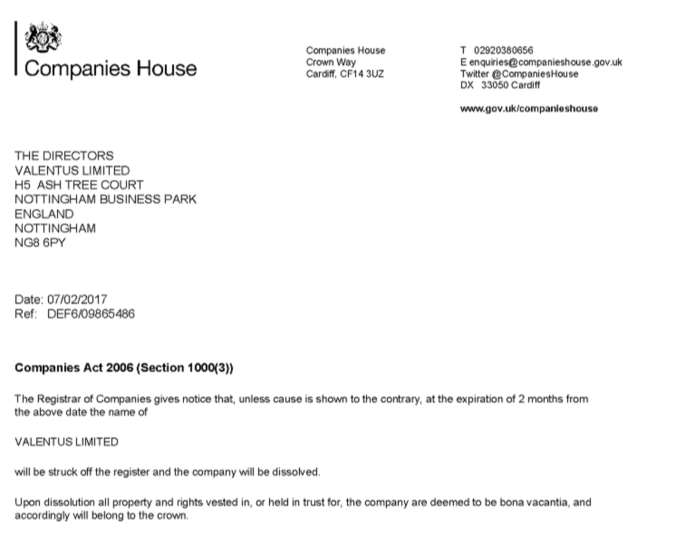 Companies are struck off in the UK by the Registrar of Companies if they believe there is no business going on. The company is warned about it beforehand and can apply for it to remain active. If company accounts aren’t produced and the company is sitting dormant, it is struck off. An explanation is given here by a company formation agent.

It emerges that Valentus are countersuing their coffee supplier for not delivering their coffee, and instead, selling it to a rival Vitae Global. There’s all sorts of bickering and strange accusations going on. Have a look at the link for more details. A court date is set for Dec 3rd 2018.

I was alerted to this official video from the Valentus website that explains how you can join the company. The woman giving the presentation is Beth Robinson, now Brannan. All the prices are given in dollars, presumably because the company doesn’t exist in the UK now.

There are  a few problems with what Beth is saying in this video. She and the company (because this is an official company video) are saying people in the UK can join by paying $499 for their first order. This is the same as about £369. In the UK, it is illegal to spend more than £200 in the first month. If this amount is exceeded, the scheme becomes an illegal pyramid scheme.

Another problem is the assertion that people can just autoship coffee to themselves and recruit, as there are bonuses paid for recruiting. There is no need for there to be any customers or sales. The whole scheme can be run just by recruiting and buying stock for yourself. This again makes the scheme tip over into ‘illegal pyramid’ territory.

Many people report Valentus to Trading Standards and Action Fraud for being an illegal pyramid scheme.

Charlotte Thomson posts this video on Facebook to explain how Trading Standards have visited her and warned her about trading illegally.

The press took an interest and wrote about Charlotte’s experiences.

Valentus reps criticise her and accuse her of lying about Trading Standards, saying she got busted for spamming people in a group, and that she should have known not to sell the products.

Charlotte releases a statement on Facebook outlining what happened.

“Due to the amount of attention this ‘story’ seems to have attracted I would like to make one final statement before moving on with my life and my new business venture.
Please note I would not have put myself in this position if I did not have every bit of evidence I need to prove the fact that everything I have said is 100% true and I am not the one at fault here. I have screen prints, recorded calls, and emails, from Trading Standards, reps and ‘leaders’ all of which will be used if required. Remember that when reading below .
I was introduced to the business in January and told by Carly Steel and her uplines to order 16 boxes to make the most profit as the cost per box decreases the more you buy. Again I have all the messages between myself and her. So for the Leaders to now say they have never sold is nonsense. If we couldn’t sell, why did we need to order ‘stock?
When I joined the company in January there was no advice or rules on ‘compliance’. It was only in April that strict rules came in that we couldn’t post company or product names. We were advised this was because we were at the final stages of registration, but that the products had been approved and we were just waiting on the UK labels. So yes, I sent a message out about a ‘weightloss coffee’ in Spring time, to Network Cornwall, a networking site that other women use to sell products or advertise their businesses. This was not a paid database and is optional whether you receive emails from other members, so at no point is this spamming. THIS despite what fingers are being pointed, is NOT the reason myself, or the company is being investigated. It is the products and the company failing to adhere to UK laws.
For the company to now be still trading without selling a product is a Pyramid Scheme – Illegal. So whether they are selling or just ‘recruiting’ they are acting illegally.
All Beth Robinson’s videos that showed how to boost sales and make profit from selling boxes have been removed from YouTube – Make of this what you will. I have screen prints from their Team Pages telling reps to keep selling but only to close family or friends, and not on social media, to avoid being caught – What sort of company is this!?
I have been advised by Trading Standards that I cannot sell or be associated with the brand, and that other leaders and reps are under investigation for also selling illegally, whether they were doing so knowingly or not. All I have done is try to speak out and protect everyone else in the firing line.
The amount of lies and deceit from the top leaders and coaches in this company has shocked me – Which led me to my decision not to continue. Yes I was offered legal assistance but I was also told I would be ‘suspended’ to pacify Trading Standards’ while a separate account was set up in another name. Ask yourself why would they do this if I was at fault? I do not want, or need to be defended by a company with such unscrupulous morals and little consideration for their representatives.
Re me planning this whole thing, I contacted Ariix on Thursday 3rd August, when it was clear the firm in question couldn’t provide Trading Standards with any of the information they requested to give them assurance that the company was trading legally in the UK
To clarify:
The company is not registered in the UK (Dublin, for your information, is in the EU )
As food and drink importers we have to register as Food Business Operators in the UK – We were never advised of this
I have been advised that the products do not comply comply with all relevant EU and UK laws including The Food Safety Act 1990, The Food Information Regulations 2014, The Nutrition and Health Claims (England) Regulations 2007 , The Coffee Extracts and Chicory Extracts Regulations 2000 and The Food Additives, Flavourings, Enzymes and Extraction Solvents Regulations 2013.
There is no evidence of the company being registered in the UK – And that ‘magic’ registration date keeps getting pushed further back as you are aware
There is no proven scientific evidence for the effectiveness or the ingredients or products
The UK labels which will illustrate that the products meet UK regulations have not been provided
Therefore it is not legal to trade in the UK even sending people to our website.
For anyone that has any concerns or doubts to my comments, rather than shooting the messenger and abusing me, use your brain and take 5 minutes out to call your local Trading Standards office who will confirm what I am saying.
I am angry, upset and disappointed at the abuse I have received for standing up for myself and the thousands of other reps in the UK. I will not stand for any more threats and abuse – And any evidence of such will be forwarded to the relevant authorities.
Apologies from the bottom of my heart to all of my customers, and team, that I have let down, I genuinely had no idea of the situation, and it has taught me 2 huge lessons to a) Do my research and b) To trust no one.
Unfortunately for many people, greed is far more important than integrity.”

Charlotte releases a picture of the email from Trading Standards proving her claims. 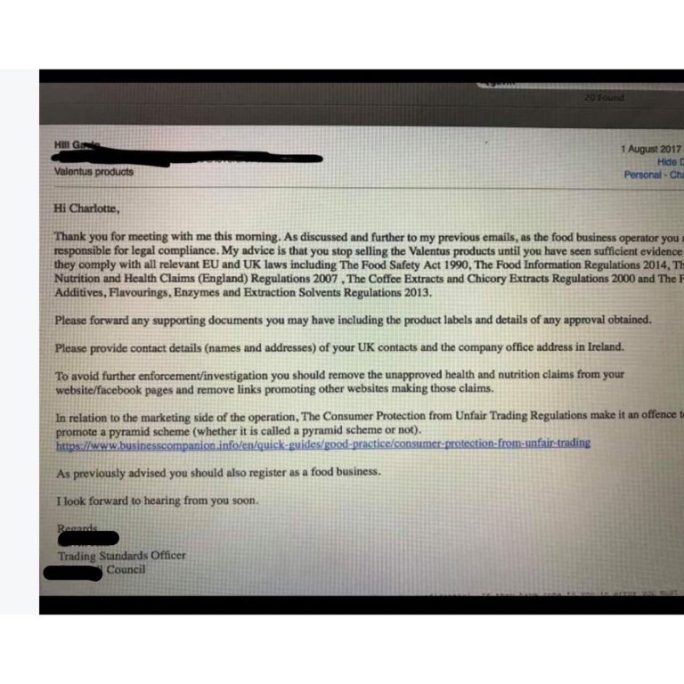 The laws mentioned above that are being breached-

Charlotte is now working for Ariix, another MLM company, selling products and recruiting people again. They also have products that cannot be sold legally.

A video emerges on You Tube of the head of Valentus registration explaining that ‘technically’ their products are illegal. She tries to downplay the significance of this and says it’s not as bad as a drug deal! She blames the whole scandal on Charlotte spamming people and someone telling tales. She does the age old thing of blaming another MLM competitor.

Some reps are claiming a launch date of a few weeks, others are saying November, some are saying they aren’t allowed to say. I guess it will down to how long it takes to sort out all their issues.

Should I add anything else to the timeline? Let me know of any developments or send me any documents/ screengrabs you have that would fit in. I will be keeping this post up to date.

5 thoughts on “What’s going on with Valentus?”

How to spot a pyramid scheme

What to do when family are in an MLM